Senate Democratic Leader Harry Reid (D-NV) today signed on as a co-sponsor to the Marijuana Businesses Access to Banking Act of 2015 (S.1726), bipartisan legislation originally introduced by Sen. Jeff Merkley (D-OR), which would give state-compliant cannabis businesses access to the banking system. Sen. Reid’s support for the banking measure comes as Nevada’s medical marijuana program has begun serving patients around the state.

“Medical cannabis providers in Nevada are giving compassionate care to critically ill patients, and they shouldn’t be putting themselves in danger to do it,” said NCIA executive director Aaron Smith. “We thank Senator Reid for supporting a fix to an irrational policy that puts people at risk and forces businesses and state officials to deal with massive logistical issues.

“Ending the banking crisis would be a win for everyone from patients to regulators to small business owners, and we appreciate Senator Reid standing up for his constituents.”

Today, the House Judiciary Committee voted unanimously to advance the Sentencing Reform Act. The bill, introduced by Chairman Bob Goodlatte (R-VA) and Ranking Member John Conyers (D-MI), and sponsored by thirty other Representatives, would reduce mandatory minimum sentences for drug offenses, expand the federal “safety valve” (which allows judges to use their discretion to sentence people below statutory mandatory minimums), and make many of the sentencing reductions retroactive.

“This vote today is a significant step toward reducing the federal prison population,” said Michael Collins, deputy director of national affairs for the Drug Policy Alliance. “We have a bill moving in the Senate, and now we have a companion bill moving in the House, so I’m optimistic we’ll have legislation on the President’s desk in a matter of months.”

The vote comes a few weeks after Senate Judiciary Committee advanced its sentencing reform bill by a 15-5 vote. The Senate bill includes provisions around reentry and recidivism, which the House is expected to address in a separate bill.

The House vote comes a week after the Chuck Colson Task Force and Urban Institute released a report noting that many of the individuals currently incarcerated for drug crimes had low criminal history levels and thus a low rate of recidivism. Almost half of the nearly 100,000 individuals in federal prison for drug offenses were in the lowest two criminal history categories, and another quarter had no prior criminal history at all. Among these people convicted of drug law violations, three quarters had no serious history of violence and half had no violent history whatsoever.

I fight for marijuana reform because it’s the right thing to do. I have several members of my family that have been arrested, locked up, and fined because of marijuana prohibition. I myself have been fined for marijuana possession before, but fortunately because I live in Oregon, it was just a fine and not an arrest. This was before Measure 91 took effect, back when marijuana was just decriminalized in Oregon. Had I been caught just one state over, in Idaho, I would have been punished much harsher.

I fight for marijuana reform because I believe that no one should be fined, or arrested, and certainly not jailed because they like to consume a plant that has been found to be 114 times safer than alcohol. I also fight against marijuana prohibition because it’s a racist public policy, proven by math alone. Marijuana prohibition is an enforcement tool that many members of law enforcement use to racially profile people, and that is extremely wrong.

There are many, many others out there that fight for marijuana reform for the same reasons. They do not do it because it’s profitable, and in fact, most of them have sacrificed a great deal of their hard earned dollars in the name of reform. Unfortunately, and I say this as one of those people, that is not enough to ensure that marijuana reform occurs across this country. I wish it was, but it’s not. We have been doing the ‘reform marijuana laws because it’s the right thing to do’ strategy for many decades with mixed results.

It wasn’t that long ago that Hillary Clinton participated in the Democrat debates on CNN during which she was asked if she supported marijuana legalization. She said that she did not. Bernie Sanders on the other hand was asked specifically about the Nevada marijuana legalization initiative that voters in that state will be voting on in 2016, and he said that he would vote for it. After the debate, Bernie Sanders was praised for his answer, and Hillary Clinton was not.

Since that time Hillary Clinton has changed her position on marijuana, which is nothing new. The day after the debate she stated that while she doesn’t support federal reform, she does support allowing states to pursue marijuana legalization if they wanted to. Today she ‘evolved’ on the issue even more by stating that marijuana should be re-classified from Schedule I to Schedule II. Per theWashington Post:

Clinton said that she supports removing marijuana from a list of schedule 1 drugs, a classification that prevents federally-sponsored research into its effects. As a schedule 1 drug, marijuana is classified among the most dangerous drugs that the federal Drug Enforcement Agency regulates.

“We haven’t done research, why? Because it’s considered a schedule 1 drug,” Clinton said during a town hall meeting at Claflin University in South Carolina on Saturday. “I’d like to move it from schedule 1 to schedule 2.”

A President Sanders Could Only Reschedule Marijuana, But No Real End to Prohibition In Sight 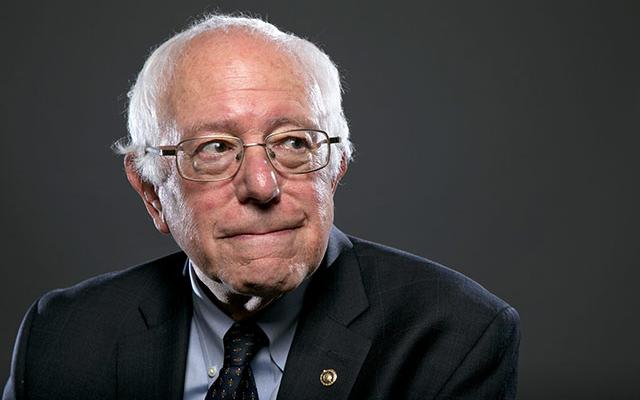 Last week, when Democratic presidential hopeful Bernie Sanders announced his plan to end prohibition in the United States during an Internet simulcast in Virginia, a great deal of the nation took notice that there was finally a candidate with enough guts to threaten the sanctity of the federal government’s War on Weed. However, it was later revealed that his attempt at removing marijuanafrom the Controlled Substances Act would be an action that he would try to push through in Congress rather than a campaign promise contingent on winning the keys to the White House in 2016.

While some drug policy experts believe that Sanders would have an easier time imposing marijuana reform through Congressional action rather than by the use of his executive powers if elected the next President of the United States, there just doesn’t appear to be any way in hell that legislation of this magnitude stands a fighting chance at being considered on Capitol Hill.

Criminal justice reform is a very popular topic these days in politics. There are many politicians out there that now act like they invented the idea of reforming America’s criminal justice system, even though they were nowhere to be found on the issue in years past. But, even though they are late to the party, at least they have finally arrived at the party, so I welcome them.

That was the message Bernie Sanders put out yesterday in a press release, which is pasted below (thanks to Tom Angell for tweeting about this press release):

“Secretary Clinton is right. We must eliminate sentencing disparities between crack and powder cocaine. That is why I have repeatedly voted in favor of addressing this disparity.