Warning: date(): It is not safe to rely on the system's timezone settings. You are *required* to use the date.timezone setting or the date_default_timezone_set() function. In case you used any of those methods and you are still getting this warning, you most likely misspelled the timezone identifier. We selected the timezone 'UTC' for now, but please set date.timezone to select your timezone. in /home/thcfinder.com/public_html/includes/functions.php on line 98
 Scratch And Sniff Marijuana Cards Offered By Crimestoppers | Odd THC Finder 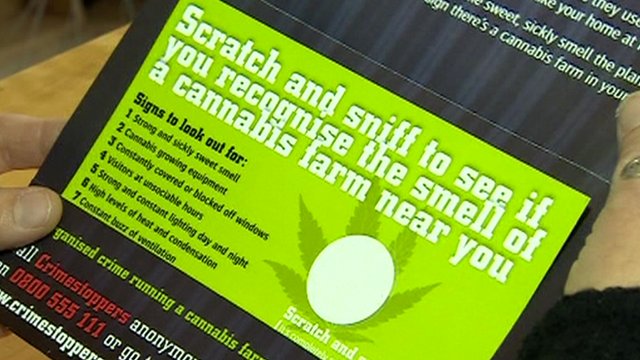 Scratch and sniff marijuana cards are being offered by Crimestoppers in a campaign to raise awareness of marijuana farms. The cards are being mailed to 201,000 UK residents.
The cards, which release the odor of marijuana, are part of a campaign to reduce the number farms illegally growing marijuana in the UK. Residents recognizing the scent are asked to report the odor to their local authorities.
As reported by BBC, West Yorkshire, in particular, has seen a recent rise in marijuana farms. In a two year period between 2010 and 2012, authorities found nearly 1,800 marijuana farms in the area. Those numbers include residential homes or apartments where residents were growing plants.
Crimestoppers hope that the scratch and sniff marijuana cards will help UK residents who would not normally recognize the odor. They point out that larger commercial operations are declining as residents move their operations to residential neighborhoods.
Read more: http://www.inquisitr.com
Comments