Drug smugglers tried to bring cannabis worth almost £3,000 into the UK hidden in a painting of the footballer Emmanuel Adebayor, the UK Border Agency said today. The wooden framed picture was seized as it passed through a postal depot in Coventry from the footballer's native Togo. The painting of the former Arsenal star now at Manchester City was addressed to a home in Tottenham, the team's north London rival. Details of the ploy and several others were revealed by the agency to highlight the methods used by drug traffickers. Officials intercepted drugs hidden in bottles of Baileys liqueur, woven baskets, packets of peanuts and yams that had been opened and glued back together.

They also found glass ornaments in which air pockets had been stuffed with cocaine and a birthday card bound for Belfast holding cocaine worth £40,000. Brodie Clark, the head of Border Force, said the drugs were found last year during searches at ports, airports and postal sorting depots. "These smuggling attempts show the lengths that organised criminals will go to in a bid to get drugs into the UK," he said. "Criminals are prepared to invest large sums of money to come up with ever better concealment methods because they know the potential profits from the awful trade in harmful drugs are considerable.

"However, the smugglers are no match for the skill of our officers and the state-of-the-art technology at their disposal." Border staff use a range of methods and specialist equipment to detect drugs. Sniffer dogs are trained to identify drugs and cash while x-ray machines can reveal unusual luggage or parcels. Body-scanners can detect whether "mules" have swallowed or are carrying packets of drugs. Officials act on tip-offs from the public, criminal informants and law enforcement agencies around the world. "Our most important weapon in the fight against drug smuggling is intelligence," Clark said. "I would urge anyone with information that might be useful to the UK Border Agency to phone our hotline on 0800 59 5000."

Synthetic Cannabis Is Worse Than Marijuana

According to the U.S. Drug Enforcement Administration, smokable herbal blends marketed as being “legal” and providing a marijuana-like high, have become increasingly popular, particularly among teens and young adults. K2 and Spice are the most common brands of the synthetic cannabis products being sold. The U.S. DEA went on to explain that these products consist of plant materials that have been coated with research chemicals that mimic THC, the active ingredient in marijuana.  WebMD.com states that these products are spiked with powerful designer drugs and don’t show up in drug tests. Initial tests found no illegal substances and didn’t detect the active ingredients that could explain the “high” produced in users.

Although the synthetic cannabis drugs have been sold in local shops and over the internet for years, they have never been officially tested in humans. According to WebMD.com, nearly all of the chemicals used to make synthetic cannabis were created for experimental use in animals and cell cultures, not humans.  Sergeant Robert Bergeron with the Bridge City Police Department said that the side effects of using synthetic cannabis are: hyperventilation, anxiety, agitation, seizures and in rare cases, death. Some other side effects include elevated heart rate and elevated blood pressure. The biggest issue with this drug is the fact that since it isn’t regulated, there’s no set recommended dosage. Also, since it is relatively new to the market, long term side effects have yet to be determined.

Furthermore, one of the chemicals used to make this drug, JWH018, and it’s cousins have a chemical structure with known cancer-causing agents (WebMD.com). JWH018 inventor, John W. Huffman, PhD, told WebMD.com that “It’s like playing Russian roulette to use these drugs. We don’t know a darn thing about them for real.” In November 2010, the U.S. DEA used its emergency scheduling authority to temporarily control the five chemicals used to make fake cannabis. Except as authorized by law, this action will make possessing and selling these chemicals, or the products that contain them, illegal in the U.S. for at least one year while the DEA and the United States Department of Health and Human Services do an in-depth study to see if these products should be permanently controlled . 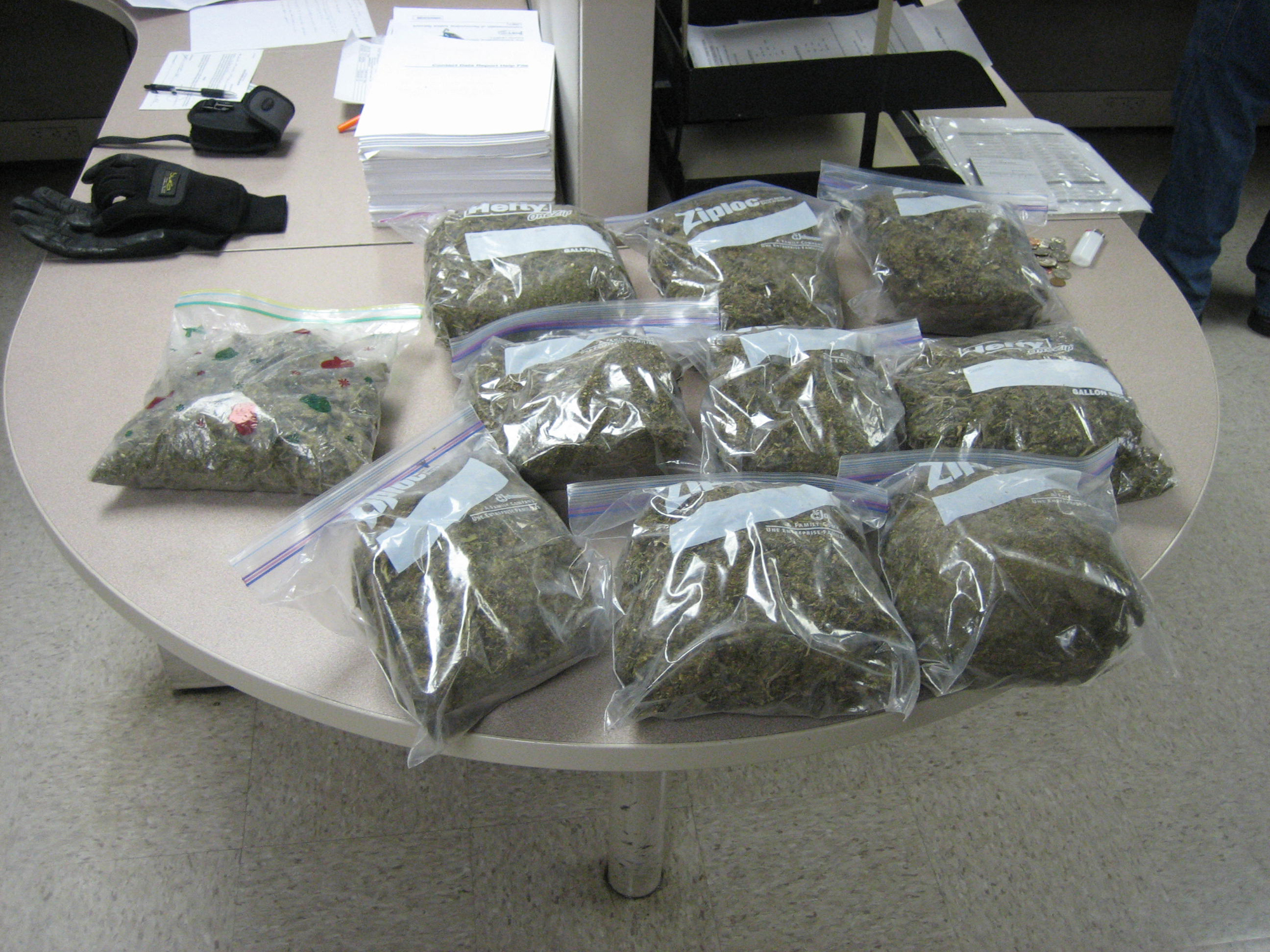 A Virginia Beach teacher no longer faces drug-trafficking charges after her son admitted in court that he shipped marijuana to her home without her knowledge.

Kellam High School teacher Darcy Mahler had been charged with sale and distribution of marijuana, transporting controlled substances and conspiracy to violate the Drug Control Act.

Those charges were dropped last month, but she was convicted of a related misdemeanor charge. The Virginian-Pilot reported Tuesday that Mahler is appealing that conviction.

The charges stemmed from a shipment of more than 6 pounds of marijuana sent to Mahler's home. Kenneth Mahler has agreed to plead guilty to two felony counts. A friend of the younger Mahler, Devin King, also faces several drug charges.

Mahler remains suspended from her job pending an appeal.

Local authorities have uncovered nearly 5,000 pounds of Cannabis hidden in a tomato shipment, their last major seizure of the year. Customs and Border Protection officials in Nogales say the load was being smuggled across the Mexican border in a tractor trailer on Thursday evening.

During a standard X-ray inspection of the cargo officers found anomalies and called for a narcotics detection dog. The dog alerted to drugs as the tomato pallets were being unloaded for inspection. 210 bales of marijuana, worth an estimated street value of $4.2 million were seized. The driver, a 48 year old man from Mexico was arrested and turned over to ICE where he shall be processed and await his day in court.

Shooting victim charged in pot bust out of hospital 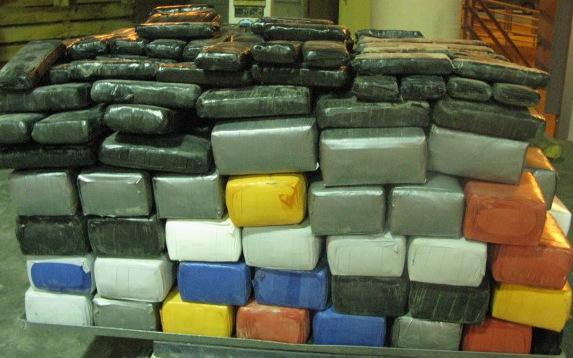 FAIRFIELD TWP. — A 21-year-old man facing charges after police seized 850 pounds of high-grade marijuana from a house he was renting has been released from the hospital after he was shot in the face in a home-invasion shooting.

St. John said that the property owner Rivera was renting from will “absolutely not” face charges, as authorities “are confident that the people who owned the house had no clue what he was using the house for,” he said.

Rivera was shot in the face early Dec. 30 after two men forced their way through a back door of the home Rivera was renting at 6699 Fayetta Drive in Fairfield Twp. The suspects stole an undetermined amount of marijuana and fired two shots at Rivera before fleeing.

The suspects remain at large.

Rivera suffered a gunshot wound below his right cheekbone from a .22 caliber firearm; a second shot grazed the side of his head, said St. John.

Rivera was transported by a Fairfield Twp. life squad to Atrium Medical Center in Middletown. From there, he was transferred to Miami Valley Hospital.

If convicted, Rivera, who previously lived in Middletown, could face up to 18 years behind bars, St. John said.

The marijuana was found in the basement of the home Rivera had rented since about September. The drugs are suspected to have come from Mexico, Jones said.

The estimated value is $1,200 per pound, with an approximate street value of $1.02 million, said Lt. Mike Craft of the Butler County Sheriff’s Office. Jones said the bust is the largest in Butler County history.

In addition to the marijuana, a 2001 Ford Ranger with Illinois license plates, a 2006 Chrysler Town & Country minivan and a 2004 Acura also were seized.

No court date for Rivera has been set.

A former soldier set up a cannabis factory at his Hucknall home with military precision, a court was told. Police found a sophisticated arrangement at the house on Bentinck Street, with charts for each growing cycle for the drugs. A total of 57 plants was found with a yield value of more than £13,000. This could have gone up to as much as £25,000, Nottingham Crown Court heard. Jamie Smitham (30), who has now moved away from Hucknall, admitted production of cannabis and possession of cannabis with intent to supply the drug.

But he was spared an immediate prison-sentence after the judge heard of his exemplary Army record and 11 years of service to his country. The court heard that on Monday March 22, police raided the property and found 29 plants being cultivated in a grow tent in the dining room of the house under artificial lighting. In the front bedroom were a further 18 plants with lights above them and a form of air conditioning. In the back bedroom, ten more plants were discovered. These were described as being very healthy. Paper charts detailed a rolling growing-programme of 12-to-16 week cycles over the previous seven months. When interviewed, Smitham admitted doing research on the Internet on how to grow cannabis and confessed to buying seeds for the drugs from Amsterdam in Holland.

His barrister, Balraj Bhatia, said: “He went about it with military precision, given his background.” On discharge from the Army, Smitham did not seek counselling but tried to deal with a return to civilian life in his own way and started using cannabis, Mr Bhatia said. His “pretty heavy” usage was under control until 2009 when he went to the aid of a bouncer in a fracas outside a nightclub. Both of them were injured in the confrontation but three men who escaped were later given custodial sentences. While on an Army tour of duty, Smitham also saved the life of a colleague, the court was told. Judge James Sampson told him: “The police found a significant cannabis factory in your home. “But you have shown geniune shame and remorse, and you have years of service for your country.” The sentence was 12 months in prison, suspended for two years, plus 300 hours of unpaid community work and £670 court costs.