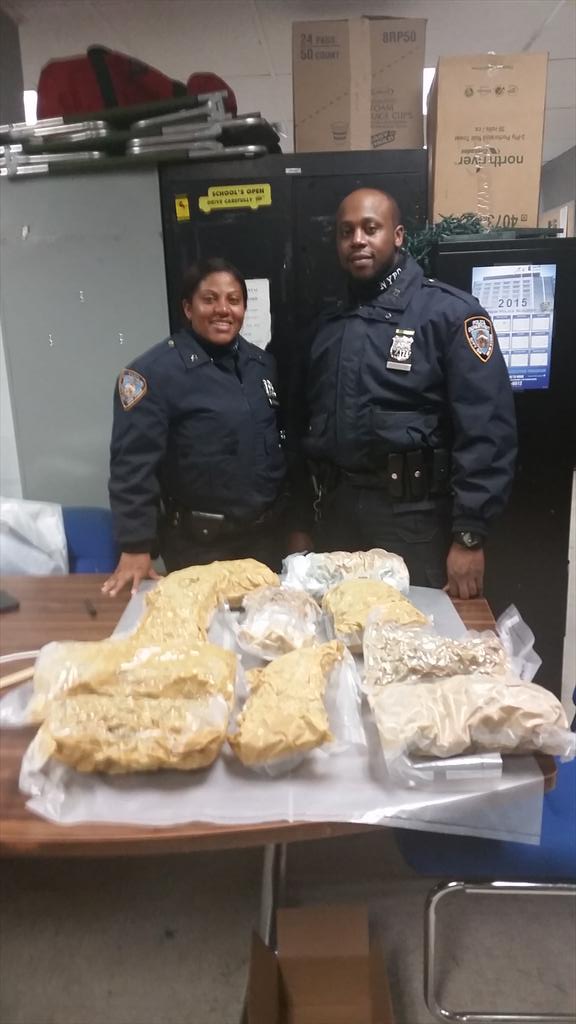 A kosher food grocer found himself in a sticky situation when 10 bags of weed — stashed inside vacuum-sealed bags of peanut butter — showed up at his Brooklyn shop in the mail, police sources said.

The owner Kahan’s Superette told cops whoever mailed the mystery package must have made a mistake — because he doesn’t sell those kind of treats, the sources said.

“It wasn’t anything that they asked for,” a police source said.

The bizarre package arrived at the food market on Kingston Avenue near Union Street in Crown Heights at 4 p.m. on Monday, the police sources said.

“Wrong delivery address results in the seizure of 10 large bags of marijuana wrapped in peanut butter,” the 71st Precinct tweeted, along with a photo of the gooey mess on Monday.

The marijuana, which was delivered by the USPS, was wrapped in plastic bags then covered in peanut butter.

“I have no idea where it came from. It was just dropped off,” a worker at the shop told The Post.

It’s unclear how much weed was in the packages. Cops declined comment on where the packages had been mailed from.

The grocery store sells such items as Marvid kosher chicken, bagels and fresh salmon, according to its Facebook page.

When Brooklyn neighborhood website CrownHeights.info reported on April 1 that a kosher grocery store in the Jewish enclave had received in the mail 10 bags of cannabis hidden in vacuum-sealed plastic containers of peanut butter—well, we thought it was an April Fool joke.

But the website's source was the previous day's New York Post, and it actually looks pretty legit.

The grocery, Kahan's Superette on Kingston Ave., apparently reported the find to the police.

"Wrong delivery address results in the seizure of 10 large bags of marijuana wrapped in peanut butter," the 71st Precinct tweeted, along with a photo of the gooey mess.

"I have no idea where it came from. It was just dropped off," a worker at the store told the Post.

The store sells such fare as kosher chicken, bagels, cream cheese and fresh salmon, according to itsFacebook page. Nobody seems to have asked if Kahan’s had ordered a shipment of peanut butter.

CrownHeights.info reported that a similar incident occurred at a different Kingston Ave. shop—Crown Kosher Meat—almost exactly two years ago, when the owner received a Fed Ex delivery of over 25 pounds of "distribution grade marijuana."

Crown Heights is a neighborhood where orthodox Jews and Afro-Caribbeans co-exist—for the most part peacefully, though the neighborhood was the site of violent riots in 1991. The cops aren't treating the owners of Kahan's Superette as suspects, but we can't help but wonder if they would have the same attitude if the pot had arrived at a Black-owned business.

In any case, a cannabis-peanut butter connection is a much more positive vibe than the "Pizza Connection" that brought massive amounts of heroin into New York City back in the '80s.

Two Norwegian teenagers have been arrested for bringing Easter cakes with massive doses of marijuana inside to school. Three teachers suffered from food poisoning and sought medical help.

The “joke” was revealed when several teachers and other employees of Lier Upper Secondary School experienced symptoms of a mysterious illness and found themselves having difficulty remaining on their feet, local media reported.

“They felt ill. They were dizzy and felt totally out of it. They were basically bedridden,” head of the local police Arne Lauvålien told Norwegian state broadcaster NRK on Thursday.

Nobody suspected the bakers until three teachers were taken to the hospital where blood tests revealed they were sickened by large doses of cannabis. At that point, suspicion fell on the Easter cakes.

“When we began to unravel it, it became clear quite rapidly which of the cakes it had been. The school knew who had baked the special cake, so we were on the trail of the cake bakers relatively early,” The Local quoted Lauvålien as saying.

The students who brought the cake to school to share with their class were arrested the next day after the incident and charged with possession of marijuana. Both teens admitted to filling the cakes with cannabis.

Police questioned the students to find out where they had got the marijuana and what inspired them to drug their teachers and classmates.

“What we have here is someone who has not thought about the consequences,” Lauvålien said. “The teachers have actually been poisoned.”

ST. PAUL, Minn. - Police say a St. Paul pizzeria and ice cream parlor turned out to be a front for a marijuana trafficking business.

The investigation began last summer after a concerned citizen reported that Papa Dimitri's Classic Pizza and Ice Cream was rarely open and didn't seem to do much actual business. According to the criminal complaint, the employees there complained about a lack of heat, even though it had a pizza oven, and typically ate at nearby burger restaurant instead of at the pizzeria.

Ryan Brooks declined to speak with police when he was arrested. It's not clear if he has an attorney.

Marijuana activists have been saying for decades that the DEA needs to be de-funded. The agency has caused so much misery and ruined so many lives in the name of the drug war. The money that goes to fund their failed war on drugs could be going to schools, roads, or just about anything else. A story broke yesterday which highlighted just how out of control DEA agents can be. Per Politico:

Agents of the Drug Enforcement Administration reportedly had “sex parties” with prostitutes hired by drug cartels in Colombia, according to a new inspector general report released by the Justice Department on Thursday.

In addition, Colombian police officers allegedly provided “protection for the DEA agents’ weapons and property during the parties,” the report states. Ten DEA agents later admitted attending the parties, and some of the agents received suspensions of two to 10 days.

The stunning allegations are part of an investigation by the Justice Department’s inspector general into claims of sexual harassment and misconduct within DEA; FBI; the Bureau of Alcohol, Tobacco, Firearms and Explosives; and the U.S. Marshals Service. The IG’s office found that DEA did not fully cooperate with its probe.

‘Some of the agents received suspensions of two to 10 days.’ Some? So not all of them were suspended? And those that were, were only suspended for 2 to 10 days? This is your tax money at work America. As many people have said on social media, if this isn’t enough to get meaningful change in our federal government’s law enforcement system, what will? The infractions occurred between 2005 and 2008.

A defense attorney was cited Tuesday after a bag of marijuana fell out of his pocket in front of the judge, according to Connecticut state police.

He was cited for possession of less than four ounces of marijuana.

The Hartford Courant reports that Fazzone took the marijuana from a client's son before court Tuesday morning. According to the Courant, Fazzone planned to sit down with the boy and have a conversation about the pot after he got home from school.

Fazzone, who is listed online as practicing at 39 State Road in Uncasville, could not be reached for comment Tuesday evening.