Warning: date(): It is not safe to rely on the system's timezone settings. You are *required* to use the date.timezone setting or the date_default_timezone_set() function. In case you used any of those methods and you are still getting this warning, you most likely misspelled the timezone identifier. We selected the timezone 'UTC' for now, but please set date.timezone to select your timezone. in /home/thcfinder.com/public_html/includes/functions.php on line 98
 Man Eats Dog Alive While High on Synthetic Marijuana | Odd Marijuana THC Finder 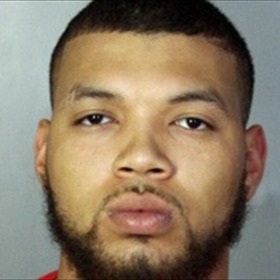 WACO (KWTX-TV)—A Waco, Texas man faces a charge of cruelty to a non-livestock animal in a bizarre incident in which he attacked and ate his family dog.  Michael Terron Daniel, 22,  claims he was high on the drug K-2, also known as synthetic marijuana, when the attack occured.
Police say Daniel chased a neighbor while barking and growling like a dog and then attacked a family dog, which he beat, strangled and then started to eat. Daniel was arrested Monday at his workplace without incident, police said.
The arrest stems from an incident on June 14th.  A caller to 911 reported that a man was “going crazy.” The man, who evidently assaulted several people at the home and told them he “was on a bad trip from ingesting K-2, ”got down “on his hands and knees and chased a neighbor while barking and growling like a dog,” according to witnesses, Waco police Sgt. W. Patrick Swanton said.
The man then took a medium-sized black dog onto the front porch of the home where he beat and strangled the animal and then “began to bite into the dog, ripping pieces of flesh away,” Swanton said. The dog died at the scene.
Officers found Daniel sitting on the porch with blood on his hands, clothing and face, Swanton said. He was “initially incoherent and unresponsive,” Swanton said, and was taken to Providence Health Center by ambulance. While waiting for paramedics to arrive, Swanton said, Daniel asked officers to fight him or use a stun gun “to help him get off his bad trip,” Swanton said. Officers did neither, Swanton said.
K-2 is a form of synthetic marijuana. None of the chemicals the herbal product contains is a copy of anything found in cannabis, although the effects can be similar. Studies suggest synthetic cannabis use is associated with psychosis and the exacerbation of existing psychotic disorders. Extreme paranoia, hallucinations and violent behavior have also been reported.
Source: http://www.local12.com
Comments