Warning: date(): It is not safe to rely on the system's timezone settings. You are *required* to use the date.timezone setting or the date_default_timezone_set() function. In case you used any of those methods and you are still getting this warning, you most likely misspelled the timezone identifier. We selected the timezone 'UTC' for now, but please set date.timezone to select your timezone. in /home/thcfinder.com/public_html/includes/functions.php on line 98
 Arizona police find fake patrol car with marijuana | Odd Marijuana THC Finder 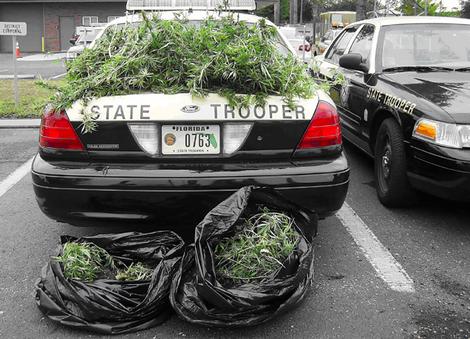 FLORENCE - Pinal County sheriff's deputies say they found a car disguised as a patrol car and another car off the side of Interstate 8 in southern Arizona, and both had bails of marijuana in the trunk.
Sheriff's officials believe the fake patrol car attempted a traffic stop Saturday night on the second vehicle to steal the marijuana it was carrying.
Deputies say the engines of both vehicles were running when they stopped to check the scene near Vekol Valley, but the occupants were gone.
The fake patrol car was a Crown Victoria outfitted with red and blue lights, a siren, spotlight and front push bar.
A deputy found it stuck in loose dirt, with the trunk partially open.
It was about 20 feet behind the other car, which had crashed.
Comments