Warning: date(): It is not safe to rely on the system's timezone settings. You are *required* to use the date.timezone setting or the date_default_timezone_set() function. In case you used any of those methods and you are still getting this warning, you most likely misspelled the timezone identifier. We selected the timezone 'UTC' for now, but please set date.timezone to select your timezone. in /home/thcfinder.com/public_html/includes/functions.php on line 98
 Feds Can No Longer Raid State Medical Marijuana Dispensaries | THC Finder 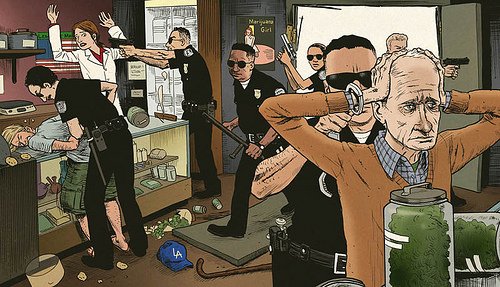 Federal agents will no longer be able to raid medical marijuana dispensaries in states where medical marijuana is legal under a provision included in the $1.1 trillion spending law President Obama signed December 16.
Enactment of the law changes a two-decade-long battle between the states and the federal government. Although 32 states and the District of Columbia have legalized medical marijuana, the Drug Enforcement Administration still classifies it as a Schedule I drug, the same class as heroin, LSD, and ecstasy, which signifies it has no accepted medical use and a high potential for abuse.
Before this law, the Justice Department could shut down dispensaries that states legally opened, although under the Obama Administration the department had kept its distance. Under the measure, included in the 1603-page law, federal agents would be prohibited from such raids. The government also cannot interfere in implementation of states' medical marijuana laws, under the amendment cosponsored by Republican Rep. Dana Rohrabacher and Democrat Rep. Sam Farr, both of California.
"This is a victory for so many," Rohrabacher said in a statement, "including scores of our wounded veterans, who have found marijuana to be an important medicine for some of the ailments they suffer, such as PTSD, epilepsy, and [multiple sclerosis]."
The move is also a victory for medical marijuana advocates and dispensary owners and operators.
Pharmacist Joseph Friedman, RPh, in Lincolnshire, Illinois, has applied to open three dispensaries in Illinois. He told Medscape Medical News the move brings "a sigh of relief" and adds a layer of protection for owners and operators of dispensaries.
"Every day these dispensary owners open their doors, they had in the shadow the risk of the feds coming in and shutting them down for any number of reasons," he said. "That's not to say that the ones selling to children or that are close to schools or doing anything under the table don't deserve to get shut down.
"We had only heard up until this point that the federal government wouldn't fund any more raids on dispensaries, so this just makes it official," he said.
Read more: http://www.medscape.com
Comments